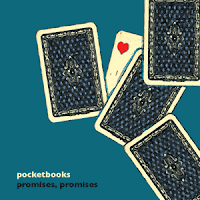 Nights seeing Pocketbooks playing their hearts out are always summer nights - the best kind of summer nights, and 'Promises, Promises' is the latest of their greatest hits. If it's raining outside, stick this on and then pre-order their second classic album, 'Carousel' from Oddbox Records. Alright?
Posted by A layer of chips at 19:43