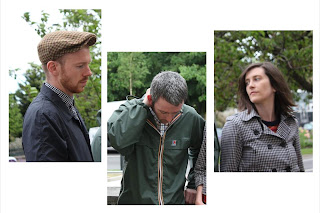 ... but I'm bored of waiting for a reply from the accounts department of a company that owes me £1,000 in unpaid wages, so I thought I'd go all misty-eyed and take a look back at what was ace about this year.

Firstly, there are two glaring omissions: albums by The School and The Smittens - both of which I've simply not got around to listening to. I am a lazy, good-for-nothing tyke. Also, I missed London Popfest this year after being too tired and too skint to spend even one night in London back in February. With 2013's version just around the corner, I hope to make up for this.

Okay, which were the best singles of the last 12 months? I've omitted the Big Wave record on Soft Power from this, because I've only just come across it. Needless to say it's utterly thrilling.

Let's start at the beginning with...

Allo Darlin' - 'Capricornia' (Fortuna Pop!). It seems so long ago now, but I went all Mystic Meg with:
'Capricornia' ois frankly beautiful. I suspect there are plenty of people waiting for Allo Darlin' to trip up after their faultless rise and rise, but this isn't the single that'll let them down. And if this is a signpost the forthcoming album, 'Europe', then Allo Darlin' will be ready to take on the world. And they will.

Into February, and along come Shrag with 'Tendons in the Night', also on Fortuna Pop! (there's a theme here).
If this is a taster of what's on the new Shrag album then I'm in for a Spring of hiding indoors, crouched over the CD player, finger hovered over the repeat button, because 'Tendons in the Night' is the band's best single yet. Bob's deadpan delivery melds perfectly with Helen's hissyfit vocals across a strict background of clockwork drums, organ and squally guitar. The last 20 seconds in particular are just about the most exciting thing that's everey happened to me on a Monday.

Mascot Fight released a single in 2012, and not many people know that. 'Played a Hand' (Cassette County) was apparently released in March, and here's what I, rather unimaginatively, said:
Mascot Fight are still going, and thank heavens for that. Their brand of awkward pop deserves to be heard by more people than a few people in the East Midlands... if you're tired of the same old chords played in the same old order then you should chuck a few pennies their way.

Into April, and stalwarts Peru were back doing the rounds with their first single in what seemed like forever. And what a dreamy return it was.
'Archie's Luck is In' (Archdeacon of Pop) is like Haircut 100 playing McCarthy song, and if that sounds terrible, then you have tits for ears. There's also a bit of The Loft in there, too. It fair takes you back.

Another band back to haunt me (in the nicest possible way) this year were Amida, whose rattling pop showed up bright as a button in May in the shape of the 'My Life As a Trashcan' ep (Jigsaw Records).
Amida choose their influences well; the eponymous opener comes on like the Bachelor Pad covering one of The Creepers' more frantic moments. It's all over the places in the most thrilling of ways, whilst 'A New Low' sounds like a more wired Jonathan Richman, with its gloriously grating guitars.

Meanwhile, Bart and Friends cooled me right back down with the 'There May Come a Time' ep on Matinee Recordings.
When you've got tracks as chocolate-y as 'A Kiss You Won't forget, which combines the effortless grace of Berry's vocals with a guitar line straight from 'Johnny Marr: the early years', then you'll never be alone.

July threw up three of the best, starting with probably my favourite single this year, The Hobbes Fanclub's 'Your Doubting Heart' (Shelflife).
Sure, The Hobbes Fanclub wear their influences on their sleeves, but they do it with pride and when they take their lead from bands that have sat if your record collection for years, then it's pretty much impossible not to fall in love with them.

Similarly understated, and just about as equally brilliant, was Charlie Big Time's 'Dishevelled Revellers' on Matinee Recordings - a record so world weary I couldn't help but love it.
Charlie Big Time are never going to find themselves breaking down any barriers musically, but when they make such gorgeously gliding melancholia like this, well, I couldn't care less.

As if that wasn't enough, back from the dead came Pale Sunday after far too long away with 'The Fake Stories About You and Me' (Matinee Recordings).
Like everything about indiepop, it's a small miracle that this records exists at all, but it does and that's wonderful. Here's hoping Pale Sunday continue to soundtrack the lives of people everywhere.

The unsung heroes of 2012 have been Dufflecoat Records, and I guess they'd have it no other way. The Proctors/Apple Orchard they released in August was the perfect end to the summer.
Dufflecoat Records, the perennial outsiders of a scene already outside of just about everything else, have been putting stuff out at an alarming rate over the last couple of years. CD-Rs have been a speciality, but this is a beautifully packaged indiepop seven inch single on vinyl so thick you want to bite it.

By the time September was here, Shrag had pummelled me into submission with their flawless 'Canines' album. It was only natural that their 'Devastating Bones' single on Fortuna Pop! struck a chord.
'Devasting Bones' is at the same time savage, sexy, filthy and full of pop.

Just as deliciously dark were Fever Dream who in October released their 'EP', erm, through Underused Records. I'm still listening to this every day.
Six songs, then, that show more invention, more emotion and more pop nous than most bands manage in six years.

Also sneaking around in October were Pale Lights, releasing a single on their own Calico Cat label. It's flippin' tremendous.
The whole ep makes me want to sit and play the record over and over again - y'know, like you did in the old days. Take a listen to the mod-ish 'She Won't Ever Calm Down' and tell me you don't want to get off the settee, get dressed up and go out dancing. And how many records do that to you now that you're THAT age?

The Spook School look set to take off in 2013, but this year they did just fine too, ta very much. Singles on Softpower and, before that, Cloudberry have been vignettes of what's to come.
This single is one of the most exciting things I've heard in quite a while. By the time the gentle distortion fades away at the end of 'Here We Go' you immediately want to go right back to the begin again. This is what pop music is all about.

November was similarly wonderful, mainly for September Girls' dark pop classic, 'Wanting More' (Matinee Recordings).
Throughout the three flawless tracks on this seven inch, September Girls create something so exciting and deeply beautiful that it's hard to understand why they aren't pop stars already.

Lastly, at the other end of the scale, come The Sunbathers with their 'EP' (lot of those this year) on Dufflecoat. A quiet classic with which to wrap up warm with.
The Sunbathers are something of a rarity. Julie and Paul are never really morose, but if you're looking to cut a rug, then you'll be searching in the wrong place on a Sunbathers record or at a gig. A gentle masterpiece.

This year was more of a great singles year than great albums year for me. Of course there were some great albums. The next time someone's not sending me any money for something I've worked ridiculously long hours for I'll write them down. Probably tomorrow, then.
Posted by A layer of chips at 17:35