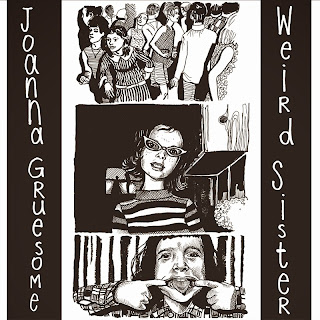 Things like working 60 hours a week for 50 weeks of the year have totally messed up me listening to to many albums this year. Singles are, of course, the instant hit - the sort of disposable yet utterly timeless format that pop music was made for.

Try listening to an album properly when you have a million boring business stories to write and a four year old tugging at your leg demanding a game of football. I realise now, this is why my Dad only made it as far as Barbara Streisand...

Despite that, there have been some outstanding albums this year. I am forever sorry that I've still not managed to listen to the Pete Green or Spook School albums properly yet. It's really not good enough, but these are the long-players that buttered my toast in 2013.

Tunabunny - Genius Fatigue (Happy Happy Birthday to Me Records)
Was this out in 2013? I think so. Either way, it's another masterpiece from the prolific pop geniuses.
Perhaps once every ten years or so a pop band from the American underground comes through and captures what it means to be living in a certain time and a certain place. They also capture what it's like to be young(ish) and in a band and alive. Think Pixies, All Girl Summer Fun Band, Dressy Bessy... and others I've undoubtedly forgotten to mention. Tunabunny are as important to me as all these bands, with this album they're destined to delve their way into even more hearts.

The Felt Tips - Symbolic Violence (Firestation Records)
Excellent second album from Scotland's finest jangle-poppers.
Most of what made 'Living and Growing' so special is still all here to lose yourself in; the unanswered questions of 'Teenage Bully', the comfort of nostalgia and the thrill of near-violence in 'The Heat of the Summer', or the seedy skiffle of 'Whipped Off'.

Joanna Gruesome - Weird Sister (Fortuna Pop!)
Find me a better debut album and I'll love you forever.
Let's get this straight; you don't just want to listen to this album - you need to. It's as simple as that. It's one of those albums that, when you get old, you'll be able to go back to time and time again. It's the sort of record you'll want to play to everyone who comes around to your house. It's the LP that'll be on your turntable now, tomorrow, next week, and in 25 years' time. You know what to do.

Mascot Fight - Abscond and Hey Presto! (Cassette County)
Ignored, but still mighty defiant, Mascot Fight's second album keeps the East Midlands' pop heart beating.
I don't want to get all regionalist on your arsehole, but I can't help but think that if Mascot Fight were from London or somewhere glamorous and vogue-ish like Stockholm, then more people would have heard of them by now. But, Derby it is, and Derby it will stay. Let's just hope that the majesty of this album manages to break out of the East Midlands gulag into the wider world.

Math and Physics Club - Our Hearts Beat Out Loud (Matinee Recordings)
Wonderful re-birth of a band we should all keep close.
Eighteen months ago, Math and Physics Club were on their backsides, with annoying real life getting in the way of more important stuff like making music. One trip to Europe and a stunning third album later and they sound in their best ever form.

Various - Nobody's Business (Candy Twist Records)
Our compilation of our bands for our times.
'Nobody's Business' is a fantastic snapshot of underground pop music at its height. Whilst some may look back at the mid-late 80s as a time when indiepop reached its zenith, history will one day show us that, as those old fuddy-duddies in Airport Girl once sort of  said, these times are good times.

Northern Portrait - Ta! (Matinee Recordings)
Handily-packaged compilation of rare tracks that kept me sane in the run-up to Christmas.
OH! But they sound like The Smiths, don't they? Yeah, and this is their 'Hatful of Hollow'...
Posted by A layer of chips at 16:15