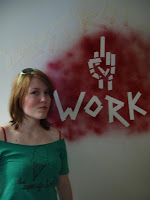 'Twas the Monday after Indietracks 2007, and we were all knackered. And yet around 40 hardy souls stayed up in Nottinghamshire to see The Besties play with The Deirdres on what was possibly the most joyous gig I've ever put on.

The bad news is that The Besties didn't tour the last album in the UK. The good news is that Marisa Bergquist is another ace band, and they're playing in Nottingham for us on Thursday 23 July, before heading off to this year's Indietracks.

Such a perfect circle led me to ask Marisa some questions. Here are her answers.

How long have you been in the Specific Heats, and how did the band get together?

I've been playing with The Heats for about a year and a half now, although Mat's been doing the band in one form or another for several years, with various lineups including solo. Mat and I met in 2004 at the first New England Popfest- He was there playing bass in a great band called Shumai (also featuring on drums one Mr. Frank E. Korn who would later join The Besties) and our bands just kind of hit if off. When we Besties realized what huge pervs they all were we knew we'd be great friends. I later found that Mat had his own band, The Specific Heats, who the Besties went on to play with many times. Mat asked me to sing a duet with him called Carl Sagan on the Heats' first album Aboard The Spaceship Of The Imagination which was in production. I was so flattered! I remember listening to the demo on the bus on the way up to Boston to record and thinking what a great songwriter Mat was and hoping not to screw it all up! The session went well and the recording came out nicely. From that experience I think we both realized how much we liked working together, so when the Heats lost their bass/organ player (the lovely and talented Jen Kaminsky) Mat asked me to take over Farfisa duties.

How does this it fit in with your stuff with The Besties?

The Besties and The Specific Heats have each grown in very different directions from our common indiepop roots- the Besties' punk leanings began to influence our sound, while Mat's love of surf and garage is really showing what he's writing these days. That said, I think Mat and I are both people who are moved strongly by melody, and I think that's where there's a mutual admiration for each other's writing, which is why we like working together so much. Of course one of the things I like the most about being in The Heats is that, unlike in The Besties, I only sing occasionally so I'm free to focus more on playing the Farfisa and, most importantly, headbangin.

Can we buy Specific Heats records?

Yes you can! Our newest release, the Back Through Thyme 7", as well as the first full-length Aboard The Spaceship Of The Imagination are available via mailorder through Total Gaylord Records, or by emailing thespecificheats@gmail.com. Digital copies can be purchased at Itunes, Emusic and Amazon. Or if you live in Greece you can buy the 7" it from Lost in Thyme, a really great garage fanzine!

How did you hear about Indietracks and what are you looking forward to most about it?

We started hearing about it when we were at the Emmaboda festival in Sweden in the summer of 2007. People were talking about this festival in the UK that took place on a train and it sounded so amazing. So glad to finally be playing it. I'm unbelievably stoked to be seeing TEENAGE FANCLUB!!! But I have to say, the thing I look forward to most is hanging out with some of the awesome people I met when the Besties toured Europe. Are you guys ready to hang out?!

How did the last Besties album go down in the US?

I don't know- good, I guess? It's hard to say. We got some really great reviews, also some really awful (and bizarrely personal) ones. But we were happy with the record we made, our friends and fans like it, so what more can you really ask? What I learned from reading the negative reviews, as well as noticing the lack of reviews at all, was that perhaps it didn't have as broad an appeal as maybe we thought it did or were lead to believe it had- but that doesn't make it any less of a record. At all. And I'll never let a "music critic" or anyone else make me feel bad about myself, my music, or the choices I've made with my life. Fuck that!

What's the best new band in the US right now?

Are you at all jealous of the success Pains of Being Pure at Heart are having?

The short and honest answer to your question is yes, if only in the sense that of course every band wants to do well. Mostly we were just thrilled to watch them catapult to indie super-stardom because they're great, happen to be the nicest folks ever, and have always been big supporters of our band. We couldn't be more pleased that their music is reaching as many people as it is now. But being envious of their exact position and circumstances, no. It's funny, our record Home Free was released on the same day as theirs and you can see the uh, very different trajectories of our two bands from that point. Comparing these trajectories has been interesting for me- it really clarified for me what I do and don't want for my band. What they've got going on (huge festivals, blog presence, television appearances, etc) isn't exactly what's right for The Besties. Now that's not to say that if we blew up (juuuuust a little) I'd wish it away if it meant we were able to reach a few more people, have an easier time booking tour, etc. But for now I'm actually quite happy being a basement band- it feels real to me and it's just who we are.

I'm also aware of the danger of feeling that you're owed something because of the choices you've made in your life. When you play in a touring band at our level, you do things like work shitty jobs, live in crumbling apartments or nowhere at all, and make all manner of personal sacrifices in order to make it all physically and financially possible, and for some people that leads to high expectations and extreme bitterness if those expectations are not met. You have to remember that no matter how hard you work, or what you give up in your daily life, people still might not like your band and you have to be ok with that. Welcome it even- because most likely it means you're doing something right- and keep on going because you believe in it. There's simply no room for a sense of entitlement in making music- at least any music that matters.

Poop in the woods as opposed to using those nausea-inducing port-o-lets. After day 1it's just not worth it to go into those things for any length of time, no matter how brief. But be considerate and find a spot away from the path, naturally.
Posted by A layer of chips at 14:04

That Besties/Smile and a Ribbon/Deirdres show was one of the most uproarious, splendiferous, delirious gigs I've ever attended

Only 40 people were there? I pity the rest of humanity