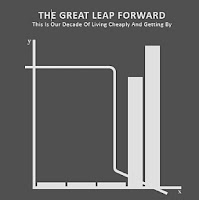 Yet this is really agit-pop at it's very best. Those two lighter moments aside, 'This is Our Decade...' is a kick up the arse to the much rest of pop music which seems intent on getting by by pretending that nothing really bad is happening, and that singing exclusively about not copping off with the girl from the chip shop is all that matters. There's nothing wrong with heartbreak over a saveloy, but sometimes I need more, and the Great Leap Forward have given me it. A properly thrilling, angry piece of work.
Posted by A layer of chips at 15:31

Completely agree. Both this and 'Finished Unfinished Business' are great albums. Mexborough's best kept secret for way too long.