Frankie and the Outs 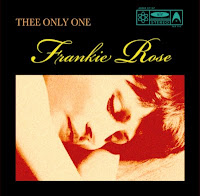 I've sort of tried to ignore the whole Dum Dums/Vivian Girls thing so far, for some reason. But I really can't turn a blind eye to Frankie and the Outs, which I believe is some kind of Vivian Girls offshoot, or something.

There's a track on their myspace page called 'Where do you Run To?' which verges on the religious. Think of school choir singing Champagne Socialists songs whilst the drunk music teacher directs them slumped up against the piano. It's probably one of the most beautiful songs I've heard this year. Or any year.

They have a single out on Slumberland in October. It seems to go under the name of Frankie Rose, the drummer from Crystal Stilts, and it's called 'Thee Only One'. Once I get out of this financial pickle, I'll have to buy it.
Posted by A layer of chips at 19:30

The song "Where Do You Run To?" is also on the S/T Vivian Girls album. Frankie Rose was their original drummer. She also has roots in the band Crystal Stilts, which is worth a listen.