The Hillfields - It'll Never be the Same Again (Underused Records) 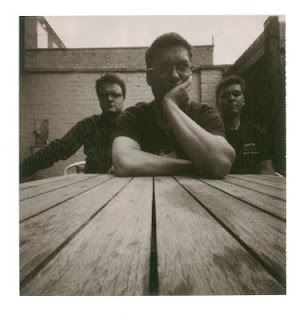 I've listened to this record about 15 times now, and I'm still getting something different out of it each time.

It's serious; funny; maudlin; brilliant; ecstatic; intelligent; and maybe a little overlong. But ignore that last bit, because when this is good, it's amazing. Tracks like 'Down on You', 'Lolife' (with it's "fucking tv" refrain, 'Afterburn' (which manages to a quite wonderful shoegaze-y ending), and 'No More, No More' - which reminds me of all those late 80s indiepop bands like The Close Lobsters. And those three come one after another, hit after hit.
Then there are the songs that manage to creep under your skin at a much slower pace, such as 'Antifolk', which is an altogether more subtle heartbreaker, or the simply pretty 'Spoon', which, after a while, has hooked itself into the inside of my brain.
There are echoes of Echo and the Bunnymen here, of Velo-Deluxe, and more recently The Windmills. And so it's not all happy-happy-glee-glee, and it certainly doesn't sound like a debut album at all, but as the nights grow longer and winter stretches out before us, that's maybe what I want. "The endless days of summer have ended", sings Rob Boyd on the psychedelic 'Medicated'. Let's hear it for cold weather.
Download 'Down on You' here.
Posted by A layer of chips at 13:39

I am interested. I like his voice a lot. It is somewhat similar to that of Stefan Northern Portrait. The music is nearly there too. I wish there was something a little more stand-out about the music for me. It's got a pleasing mood and tone.

Whole album, huh? I think I should investigate further on MySpace before committing. But this is up right up my alley.

it's a cracking LP. Easily one of my faves of the year thus far!