And they call it progress 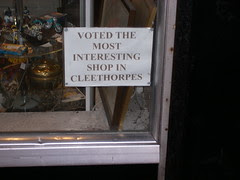 I was in Cleethorpes at the weekend, fulfilling parental contractual duties. I'd forgotten how unremittingly bleak North East Lincolnshire can be on cold February days, that is until, on the way there we drove through Caistor, where I went to school.

Christ, Caistor is glum. It's supposed to be a scenic market town, and if you look hard enough there's still evidence from when the Romans established it. The Market Place - once home to the largest concentration of pubs in the UK (or something like that - look it up if you can be bothered) is now home to some depressing takeaways, tat shops and a run down supermarket. The chippy is still there, but that was always shit.

What's brought the demise of this once thriving town? I'd like to think it was the closure of its pubs. When I was at school, we used to try and get served in any one of The White Hart (which is still limping on), The Red Lion (now flats - of which I suppose most are empty), the Fleece (now a fucking private pre-school nursery), and the Talbot (which dated from the 16th century, was the cosiest of all the Caistor pubs but was somehow allowed to close a couple of years back). Without these pubs, there is literally sod all to do in Caistor apart from sit in the Market Square and make a nuisance of yourself. Which is what the tuff kids used to do years ago, whilst listening to Big Black and drinking White Lightning cider. Occasionally one of them would rev up his motorbike and whizz around the block, which was even more terrifying.

I guess these scenes are replicated throughout the world, but it's easy to forget those that chose to stay close to where they went to school or were brought up. Or those that got stuck there. But going back doesn't half remind you how lucky you were that you escaped, and how you can never really go back without seeing the outline of teenage self walking around the place. And that scares me a bit. Especially as I was probably singing Mission songs to myself at the time.

I found this clip on you tube this afternoon after I'd written all this stuff. I'm sure no-one else in the world will find this interesting, but it's pretty amazing... for me at least. Oh, and I'd advise you to turn the sound down if you're bored enough to watch this.