Pale Sunday - The Fake Stories About You and Me (Matinee Recordings) 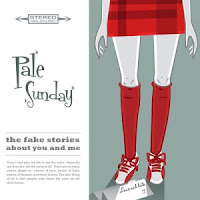 Pale Sunday first came into my life when their glorious 'A Weekend with Jane' ep shimmied its way through my letterbox almost a decade ago amidst a period of serious upheaval. It's fair to say that back then it was a ray of light, and the band have remained that way since. Even when they let me down by not turning up for Indietracks the year before last.

It's easy to forget Pale Sunday, to be honest; stuck in Brazil they've never toured Europe, and so it's left to my good comrade Jimmy at Matinee Recordings to keep in touch with them, and put their records out now and again.

'The Fake Stories About You and Me' is Pale Sunday's strongest release since those nascent days of 2003, with four songs that, whilst hardly tread a new path, are definitely more confident, rounded, and affecting that at most times since that first Matinee release.

'Happy (When You Lived Here)' is a fair heartbreaking tale of broken relationships and starting over - but ultimately hope, and it's that hope that almost makes the guitars break loose at times. Pale Sunday are too cute for that, of course, and the melancholy harmonies return. It's a majestic three minutes, but it's probably best you don't listen to it if you're having a hard time at home.

'About Your Life' perhaps should've been the lead track, but who cares where it is; I'm just glad it's here. Built around a guitar riff that will worm its way into your life for days and days, it's just thing to perk you up after the bitterness of the previous track and hints at a love of Teenage Fanclub or mid-period Ride.

'That's the Way' further illustrates a love of early-90s guitar manglers and is all the better for it (it even goes a bit shoegaze on the fade out), whilst Pale Sunday revert to type on 'The Winter Song' - a paean to the shortest day, and perhaps one of those clever metaphors about change and upheaval and all that jazz.

Like everything about indiepop, it's a small miracle that this records exists at all, but it does and that's wonderful. Here's hoping Pale Sunday continue to soundtrack the lives of people everywhere.