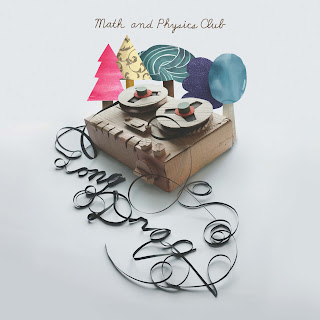 If, like me, you've got to somehow cram a full week's work into three and half days this week, then you'll understand that long reviews of these fantastic singles might have to wait for another day.

However, if you want to know what the best single to be released this year is, then look no further than the mighty Math and Physics Club who continue to lead the way in perfect pop with the hand-clap laden 'Long Drag' (Matinee Recordings). Recorded at the Dub Narcotic studios, 'Long Drag' sees Math and Physics Club in a confident, almost sassy mood. The band has come such a long way since that brittle, beautiful first ep, and it's a wonderful thing to behold. B-side 'Across the Paper' waves hello at the past, with its soft-shuffle, bluegrass-tinged strings and coy vocal. It's a quite wonderful little package of songs, and bodes well for the forthcoming album.

Also out on Matinee this month is a new single by long-lost legends The Steinbecks. Not seen around these parts since the mid-2000, 'At Arkaroo Rock' might have been borne out of the recent fantastic Sugargliders retrospective. This is green, lush introspective pop music with inch perfect guitar phrases, and the usual love of nature that comes through on all Meadows brothers recordings. 'All Desires Known' barely exists, and has an almost mediaeval air about it, whilst 'Cabin Fever' is the most instant song here, and shambling ode to drunken camping trips. We've all been there, sweetheart.

The Very Most were one of several casualties from Manic Pop Records sadly closing down, but their new ep 'Just a Pup' deserves to be heard. The lead track takes from The School quite heavily, with jaunty keyboards and what sounds like a bit of brass in there. There's also the most summery guitar solo you'll ever hear. It's a hit for me.

Flowers continue to wow the smart set in London with their buzzsaw pop and choirgirl vocals. They've so far left me a bit high and dry, but 'Until Your Dead' (Fortuna Pop!) hits the spot alright. It's a righteous, full-on aural assault that never really strays far from pop classic bracket. Over on t'b-side and 'Clover' steals the show for me, being both charming and a little bit brutal.. Now that they're sounding much more than Primitives copyists, maybe it's time they were adored a little more.

I'm off to immerse myself in regional business journalism for the next 72 hours. See you at Indietracks!