Week of Wonders - Piggybacks (Happy Happy Birthday to Me Records) 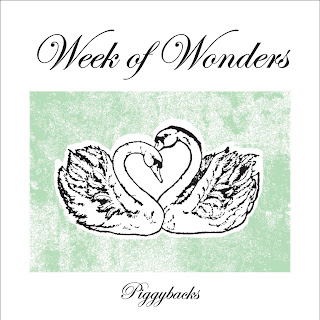 Featuring the endlessly fascinating Leif Anders, ex of Orca Team, Week of Wonders' debut single 'Piggbacks' is bullet of refreshment during the stifling heat of the weekend.

Leif's voice is immediately recognisable, but this time he's backed by thrashing drums and a guitar that sounds like it's set to steel drum setting. It's an instant hit of sunshine pop accompanied by the most wonderful, weird video featuring the best cat I've seen in a while. Look at its face!

Last summer was a blast. Orca Team were such a short, sweet celebration, and it's a terrible shame they're no longer with us (anyone who saw their stint in the UK last year couldn't fail to fall in love), but, if Week of Wonders keep this kind of early season form up, they'll surely worm a similar way into our hearts. Forget the 'tropical punk' title - this doesn't deserve to be pigeonholed.