Neither Brighton nor Manchester... 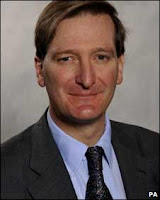 There's perhaps only one thing more depressing than this piece of ridiculously ill-thought out, potentially dangerous nonsense from the Tories, and that's Jack Straw (hitherto perhaps the most authoritarian Home Secretary the UK has ever had) bleating: "But we got there first and the police can already do that, Mummy!" Add in a splash more of the old criminalisation of teenagers and children at the bottom of that BBC news piece, and you realise you really are choosing between a kick in the bollocks and a smash in the face at the General Election.

It's at times like this that you need Redskins more than ever before. Here's an amazing live version of 'It Can Be Done'.
Posted by A layer of chips at 19:48