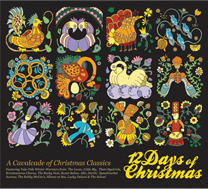 ... and on the third day of Christmas, I will shoot you in the face.

Or at least I would if I was listening to Brontosaurus Chorus's mighty 'Calling Birds' on the superb '12 Days of Christmas' album, that you can buy here. I think, in this album, I might have found the perfect antidote to memories of Christmas shit outlined a couple of posts back.

Each band on this album was only given 31 days to write a Christmas song, which seems a bit mean. But they've nearly all triumphed. The Rocky Nest prove once again that they should write the soundtrack for the first indiepop spaghetti western film; Them Squirrels have written the best lonesome Christmas song ever; Allo Darlin' contribute a song so evocative that if I wasn't so ruddy MACHO I'd break down in floods; Speedmarket Avenue's 'Where Maids are Queens' makes 'The Frog Chorus' sound like a Napalm Death track; whilst if Silence at Sea were to come to my door to sing 'Lords Keep Leaping', I'd invite them in for a biscuit and an episode of Coronation Street. If that wasn't enough, The School (yes, them again) end things off with the cute, ramshackle 'Drummer Boy'.

Right, I'm off to put my Christmas tree up, whilst you listen to Silence at Sea's 'Lords Keep Leaping'.
Posted by A layer of chips at 15:02