"Fanzines aren't friends": the This Many Boyfriends interview 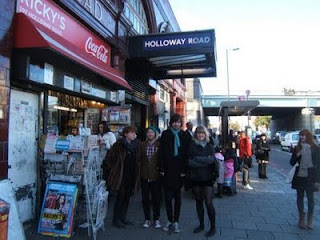 Leeds-based shamble-poppers This Many Boyfriends are my favourite band in the world this week, so I thought I'd send a few questions over to Lauren. She's the one who plays the drums and sings at the same time. But the Phil Collins comparisons stop right there.

How, why and where did you all meet?

This is kind of a long story involving a lot of change! Adam and I promote in Leeds, we've been going since September 2008 with Tiger Trap, which is sometimes a clubnight, sometimes a gig and a clubnight and sometimes a themed covers gig. In December last year I decided to try for a versus night with my friend's indipop clubnight, With Whom To Dance? The friend in question was Alex, our ex guitarist. We all met up and had a friendly pub quiz-off, and discussed details for the versus night. There I met richard and Nicky, who were also in the original line up of the band. Everyone was discussing the band (then called HORSES!) and it sounded like fun. It turns out they were stuck for a drummer for the first practice so I volunteered and basically joined the band. Originally it was Richard singing, Nicky singing and on glock, Adam on guitar, myself drumming and Alex on bass. Then we decided to get Tom on bass so Alex could lead (I didn't know Tom before, he was Alex's friend) and then Nicky and Alex left. We had a brief stint with Ed from Just Handshakes (We're British) as our guitarist but sadly that only lasted one gig as he' actually a bassist and wasn't comfortable on stage. We then got Jamie, who is Tom's housemate in on the action. He picked everything up super fast, we've had him for 3 gigs now and he's pretty brilliant and fits the band perfectly. It's ace.

What's the song 'That's What Diaries Are For' about?

Ha, well this is a difficult one. I know that you know who it's about but I can't say as word gets around, y'know? It's kind of a critique on the bands who basically end up being parodies of themselves, writing songs about the same things and being stuck in a sort-of musical rut, too hung up about whatever it is (childhood in this instance I guess), to actually have anything important to say. It's about letting go of everything that makes your band into a caracature of itself, and just get on with life. How you treat people now is much more important than how you were treated 20 years ago, move on and make real friends, who cares? Like we say "fanzines aren't friends". They're really not, trust me.

Is the Leeds scene supportive towards the band?

Well… Our first gig was the scottish themed one we did with Tiger Trap, which is why two of our three songs were Ballboy covers (I adore the scottish music scene and Ballboy are maybe my second favourite scottish band behind Orange Juice). So really I put us on for our first gig. The others have been sometimes luck, but mostly because Trapdoor Minotaur love us! They've been really supportive and have basically handed us three out of our total of seven gigs! They are really ace, and such lovely people that we're really lucky to have them behind us.

Otherwise, Leeds is a difficult one. Unless you have the right kind of buzz behind you and know the right people it's sometimes very hard to crack. We have friends in other bands, of course, but they seem to find it a little bit easier to get offers. I don't know what it is about us but there's really only 3 promoters (excluding myself) who are actually willing to put us on in leeds. HOORAY for Mark Sturdy, Dead Young and the Trapdoor gang. Without you, we would be nothing. What do you all do in real life? I work two jobs, one at the o2 Academy, and the other as an Admin assistant at the University. Richard works at Borders (for the time being). Adam, Jamie and Tom are all students. Jamie and Tom are in their third year this year so we're going to have to take some time out in 2010 for them.

How did your gig in London go? What that your first time in the big city of red buses and miserable people?

London was ace! It was really great. Gigwise it was lovely, not only because I remembered some of Of Mice and Mental Arithmetic from school (hooray for Chesterfield!) but also it was just so much fun. The other bands were all really nice, we got our first ever (shared) dressing room bit, and aside from majorly messing up a cover, the actual gig went really well. Our friend Nestor travelled down with us, and there were a few friendly faces in the crowd so it wasn't as intimiating as it could have been. We sill found it hard to follow OMAMA and we're going to have to do that again in December. Lord knows they're a hard band to follow. The feedback from the gig was fantastic, too. I really really liked the crowd.

After all of the shenanigans, on Friday we went exploring the city and went to the British museum, which was my favourite part of the day. I was (like most children) a major Egypt geek when I was younger, so actually getting to see the mummies and statues and everything was amazing. After that I went out and to a gig at Cargo (I think?) and ran into one of the first bands we ever booked for Tiger Trap, Wonderswan. Apparently they'd just played. The world is really small isn't it?! All of us had a really good time, it's not often we get to travel down south, so it was quite exciting. We even had a photo taken under the Holloway Road tube sign in tribute to Darren Hayman (Darren, we hope the hole in your skull isn't too painful and get well soon!); Adam, Richard and I are also massive Hefner fans. Maybe one day we'll do the Hefner tour of London.

Easiest way is this:

Jamie - I don’t think he likes them, no.

You're on tour with Trapdoor Minotaur in February. How did that come about?

Well like I mentioned before, they're all really nice (and like us) and they like us and invited us on tour with them over the summer some time this year. It'll be for a week and it's pretty exciting time really. Not sure exactly what's going on but I'm sure it'll be good fun. Sometimes I think that TMB is becoming increasingly close to becoming a Real Band. Only Real Bands go on tour, right?

For heaven's sake, when are you releasing a single?

We're doing on better than that, WE'RE RELEASING A 6 TRACK EP. Which will include a re-recorded diaries. Since the line up change, we need to get the right members recorded and actually up there. It's like the photos really. We've all been incredibly busy so a lot of things we have on the internet are slightly out of date. We're currently going on a couple of haphazard tracks and word-of-mouth. Which is probably why I shouldn't moan about not getting Leeds dates. It's all good though, we're probably playing the Brudenell for a free gig in the new year. The EP should be out before the tour. If everything goes to plan it will definitely be out before the tour. If it isn't, then I guess everyone is gonna have to order it online! This is all going a bit quick but hopefully we'll be able to organise ourselves and get our music out there.

You can download the mighty 'That's What Diaries are For' from This Many Boyfriends' last.fm page.
Posted by A layer of chips at 14:39

I'd love it if there were three promoters willing to put us on in Sheffield!

These young 'uns don't know they're born, etc etc and so on.