"I need to get out of the town" 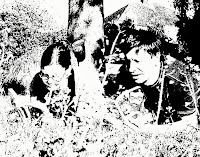 An email from someone called Julie Ives (a name which, to me, sounds like a Grange Hill character from the early 80s), telling me about her band The Sunbathers, who are from Wellingborough (a name that makes my heart freeze after a desperate three months living on Wellingborough Road in N*rthampton some years ago) and Leicester.

And where have these people been all my life?

Julie says: "We got together in 2007 when our guitarist Paul got in touch with me to say he'd been working on some new songs and was looking for a vocalist/lyricist. We'd last worked together in the early 90s in a band call the Artisans (a ‘complete career retrospective’ of 6 songs(!) has just been released on Cloudberry, but in spite of a considerable hiatus, we slotted back into writing again fairly quickly and now have a solid body of around 20songs about life, love and standing around on beaches looking longingly out to sea (hence the name!)"

To a salty mariner like myself, Midlanders' obsession with the seaside is somewhar flummoxing, but songs about the seaside are invariably ace, and so it goes with The Sunbathers' music, which manages to capture both the wistfulness and tacky romance of coastal resorts perfectly. So much so, in fact, that we're off to Skegness tomorrow for a day trip simply because I've been listening to the band's myspace page all week.

Musically, it reminds of those other seaside obsessives, Pinkie and Lovejoy - which means you're not exactly going to dance until your hair drops off, but for sensitive souls who like reading books in sand dunes, well, you might just have a new favourite band.

The Sunbathers are supporting Rose Elinor Dougall on Thursday 29 April 2010 at the Firebug in Leicester, on a Twesta Promotions night.
Posted by A layer of chips at 08:34

Hey I dug the Artisans Cloudberry retrospective! I'll give these Sunbathers a listen. So far it sounds like chilly, melancholy days by the super stony British beaches!