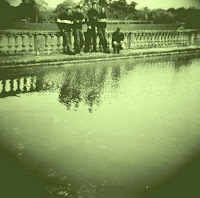 Young Michelin are from Aline in France. Now my French is, erm, mal, but sometimes you don't really need to know what someone's singing about to recognise a great pop song. And here's a band that proves just that.

Young Michelin combine a typically suave version of French pop, with some wickedly catchy early-Sarah bursts of colour that perhaps often lean too much towards The Wake, but so what, eh?
The band have a new ep out on Avingnon pop label La Bulle Sonore, which features four tracks, including my favourites; the deeply new wave 'Je Suis Fatigue' (hey, I know what that means and everything!), and the beautiful 'Teen Whistle', which is my favourite and builds and builds to a point where you just want to let go and let it smother you. It's pretty lush.
It's these sort of Anglophiles that make my Franchophilia even worse.
Posted by A layer of chips at 15:47

They also have a free single out on Holiday Records now:
http://holidayrecords.net/ym.html