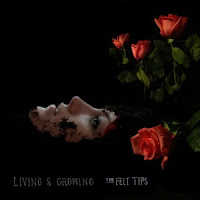 There have been so many wonderful indiepop records released over the last couple of years, but perhaps the quintessential one is 'Living and Growing', the debut album by The Felt Tips, the Glasgow four piece.

It's odd that this album's coming out at the same time as the new Belle and Sebsastian record. The two bands are so similar - yet so different. The Felt Tips are set to release a classic collection; Belle and Sebastian limp on, seemingly intent on taking part in some kind of self-parody. Oh, and 'Living and Growing' doesn't have Norah bloody Jones to ruin things.

All life is here: sex, religion, relationships, Morrissey... it's a rich soup of wonderful, heroic pop songs. And, get this: it was funded by the Scottih Arts Council, which might make 'Living and Growing' something of a rarity in the very near future, once the bastard Tories have cut all funding to organisations like that... in the name of "promoting enterprise".

Well, here's something that screams enterprise. Guitars chime, Andrew Paterson's vocals soar and have that folksy Scottish lilt that makes each song irresistable.

'Garden of Roses' shines brightest, but it's followed closely by the perky 'Engaged for a Visa', the frankly filthy 'Lifeskills' (which has an outro that Marr would've been proud of in 1985), 'Dear Morrissey', which tells the tale of disillusionment with your childhood hero (we've all been there), and 'Not Tonight' (another been there, done that moment).

The beauty of this album is its brutal honesty. It's not scared to pick its targets and shoot at will. It means something, for heaven's sake, and that' totally precious.

Download 'Garden of Roses' here.
Posted by A layer of chips at 13:23

You know how much I adore and admire your writing, Sam. I like it even more when our opinions and values coincide. Magic! Your closing paragraph is absolute truth and I hope it makes many more people fall for and appreciate this hugely talented and beautiful band.