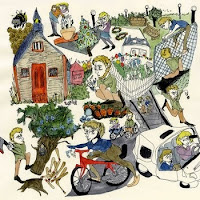 You know those desperately cloying, folk-y songs that every mobile phone company uses on their deeply dispiriting adverts at the moment? Those tunes that probably get played at every middle class, Guardianista dinner party to prove how kooky and alternative they are? Well, you might be forgiven for thinking that the New Socks album, 'Picture Story Friends Goodbye' was full of those kind of songs. You'd be wrong, of course.

There's more soul in the opening track 'Move Away' than there is on the entire soundtrack to 'Juno'. An album out love, life, losing touch with your childhood and friendships can touch all of us, surely? And yet this is not drippy hippy trip. There's a punk undercurrent to the work of Ben Morey, Molly Kerker and Becky Lovell that keeps this album honest.
In places it reminds of Jonathan Richman. In others, you can hear The Icicles, especially on 'Trampoline'. There are echoes of Jeffrey Lewis elsehwhere, and, yes, there are tender touches. 'Betty' makes you want to shut out the world can cosy up with some candles, but this is an essentially a pop album with a snotty nose. New Socks never forget this, thank heavens.
"We write honest, mostly autobiographical songs that sound like you're talking to a friend," says the press release. I can't really put it any better than that, so I won't try any longer.
Here's a link to the band's Kickstarter page, where they're raising money to do a short vinyl run and tour. Give generously.
Posted by A layer of chips at 16:40

You can earn a real income online by becoming Home Typist! As a Home Typist, your job consists of typing and placing ads on the Internet. You don't need to have experience in Clerical or Advertising. Work is very simple to do, just copy and paste the ads. Only serious people need to apply for the job.
For more details E-mail us at support.visionjob@gmail.com

Any one can do it very easily Easy Money Creation procures a wide variety of services from companies around the world. We strive to build relationships. More details:- E-mail us at support.visionjob@gmail.com