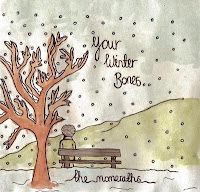 It seems kind of apt that at a time when Pocketbooks are recording their second album, along comes a band who sound like they've been listening to 'Flight Paths' on repeat for the last 18 months. Well, there are worse ways to spend your time...

The Momeraths release the 'Your Winter Blues' ep through their bandcamp page on 20 December with the sound of early Pocketbooks performances echoing in the background. The girl/boy vocals, the handclaps, the guitar shapes, the perky bass - all that's missing are some keys.

This isn't a criticism, you understand; Pocketbooks released perhaps my favourite album of last year, and there's every chance that 'Your Winter Blues' could stick around the playlist for some time to come. The songs here, and on the band's other two releases 'Millipede Stomps' and 'A Single Cup of Tea', portray a refreshing sense of pop naivety - and I like that.

At times there are also hints of Free Loan Investments, particularly on 'The Boyfriend Song', which, despite being decidely upbeat tells the tale of love betrayed and could the snotty little sister of FLI's 'Kick His Balls Out'. Spunky stuff.
Posted by A layer of chips at 08:47