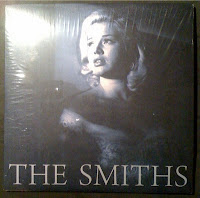 The song 'Dear Morrissey' on the Felt Tips 'Living and Growing' album earlier this year sort of sums up how I feel about the man himself these days, but, of course, The Smiths remain a very different proposition.

I always cringe slightly when people say a band or a song changed their lives, because they don't really, but The Smiths certainly affected the way I look at things when I was a teenager - and that's carried on throughout my life. I can't really say that about any other band (although maybe The Housemartins come close).

So, I was a bit excited when the usually mental Morrissey Solo forums chucked out a gem of a link where you can download some previously unreleased Smiths stuff that spanned the entirety of the band's time together. For some people this will hardly register, of course, but for me listening to these 'new' songs gives me the sort of weird mixture of excitement and wonder that I felt when I was first listening to The Smiths aged 13.

Tracks like the rough version of 'Death of a Disco Dancer' manage to pack as much wonderment into five odd minutes as most bands do into their lifetimes. Listening to the John Porter version of 'Sheila Take a Bow' - something I'd only read about in books up to now - is like discovering that Father Christmas is real after all, whilst discovering that 'Frankly Mr Shankly''s forgotten brass parts made it an even more cute slap around the face brings only the biggest smile.

Excuse the hyperbole, but, for me, this is all pretty wonderful stuff. It very nearly brings back that feeling of going out and buying a Smiths album and taking it home and putting it on your turntable for the first time. And in a year which I think has been packed with brilliant albums, singles and live performances, finding these new old songs seems like we're maybe a little bit vindicated for carrying on playing in bands, putting out records and going to gigs. Not that we need it, of course...
Posted by A layer of chips at 14:50