Never (ever, ever) enough

I’m not really one for end of year lists. It’s all a bit clinical to me, and different records can mean more to me than others at different times of my life. However, if you’re putting a gun to my cat and forcing me to pick my favourite record of the last year, then it has to be Sourpatch’s - ‘Crushin’’.

What’s so good about this album? What isn’t, more like. From sugar sweet ‘intro’ with the kids setting the scene, the album just rips my heart in two every time. It’s not got tired after so many months. Every time a tune so perfect finishes you think the next one can’t possibly top it, and yet it does it best to. It’s an emotional onslaught - a kind of shock and awe on your pop senses and nerves. It’s also, as I’ve found out this last month, perfect music to listen to on the early morning bus.

My only regret about ‘Crushin’ is that I didn’t get hold of it earlier. I wasted a good six weeks of 2010 without this album, and I feel very ashamed about that.
Right in the middle of the album is also probably my favourite song of the year. It’s called ‘Water Without Land’, and it features the lyrics: "Our days are numbered, our days are already gone/And when you remember me, remember me fondly/When you remember bme, remember the good things." And that just kills me every time. 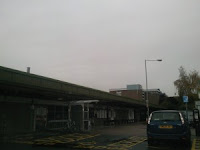 Yesterday I had to take the longest train the world to Northampton. A cold, windy, raining Wednesday afternoon, and a change at Tamworth station - a collection of buildings that could be ripped straight out of a Joy Division video. In my headphones were Sourpatch, somehow carrying me forward on the slowest London Midland train in the world.

Stepping out of Northampton's lo-rise, endlessly upsetting train station, and things don't get much better. A huge double carriageway splits the the town in two and the cars speeding down in threaten to drown out the music. Yet Sourpatch win through - they always seem to.

Alone in a cell-like room in a grotty Travelodge on a Wednesday night in a London commuter town. A shit kebab shop across the road offers up the only thing that I'm going to eat tonight. The last song on 'Crushin' - 'I Want You Either Way' seems like the perfect gallows humour.

This is one of the many reasons why I think 'Crushin' is my favourite record of 2010. I'm not even totally sure it was released this year and not last, but who cares? As a soundtrack to a year when people's lives have been thrown into further confusion by a government who want to ram home the UK class divide that still - ridiculously - exists in 2010, then sometimes 'Crushin' has been the only thing that makes any sense at all.
Posted by A layer of chips at 05:42