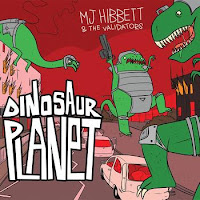 Getting a promotion at work means lots of horrible things, like more responsibility, work and tellings off. It means one good thing: more money, but that has meant working crazy long hours and missing out on listening to lots of good stuff. And so, this post is meant to be a little bit of a catch-up on music that's gone sailing by.

I'll admit now to fair despising just about all science fiction. Call me a small-minded IT department-hating fascist if you will, but I was always more of a Dumbo man than a Star Wars fan, and I've never thought Thunderbirds is "classic". I even struggle with The Flintstones.

And so it was with some trepidation that I first listened to MJ Hibbett & the Validators' indiepoprockopera 'Dinosaur Planet' (Artists Against Success) - a sort of War of the Worlds for the cardigan generation. It could be really, really shit - but somehow it works.

Why? Because 'Dinosaur Planet' - although it tries hard to be funny and wry - also has song great pop songs like 'A Little Bit' which sees Hibbett and his band of long-time friends and collaborators is full-on, straight-faced ACE SONG form.

This is how I've tended to enjoy 'Dinosaur Planet' over the last couple of weeks. Does that sound horrible? Probably, but I'm not really the sort to enjoy any kind of concept album, and often this record reminds of that terrible comedy programme that used to be on Saturday afternoons on Radio 1 in the 1980s. Now that does sound horrible - sorry.

But then straight away comes a song as sweet as 'Here Come the Dinosaurs' - perhaps the only song about an extinct lifeform that you can clap your hands to. Charm sees this record through, and the realistion that no-one quite writes songs as happy/sad as MJ Hibbett & the Validators. And live, this set of songs takes on a whole new meaning. Now - write us a full album of them, please. I'm a very traditional man, and I don't like change. You can buy 'Dinosaur Planet' here. 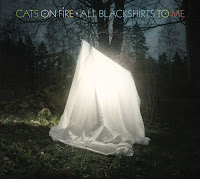 Same goes for Cats on Fire - a band I'm in deep trouble with after saying that they went to expensive hairdressers whilst reviewing their last album. I'm JEALOUS for heaven's sake, and as they graciously pointed out on their website, I have less and less hair as the days go by. Next time I see them I'm going armed with scissors, some smelling salts and a paper bag.

Anyway, Cats on Fire do have a new album out soon called 'All Blackshirts To Me', on Matinee Records again, and the lead track from that is called 'A Few Empty Waves', the biggest-sounding CoF song I've heard so far. It fair soars, in a very understated way you understand. It's a tasty taster for the new album, which you can pre-order from Matinee from 1 March.