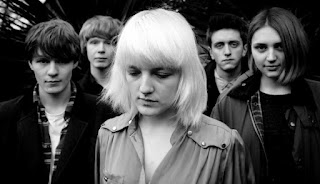 The vibrancy of youth is often overstated when it comes to music. "Startling" young bands come and go, in a hail of cockiness, Top Shop wardrobes, some instruments still being paid for by Daddy's credit card, and only the most vague idea of how to write a pop song.

A lot of young people are in a lot of bands, but that doesn't make the bands vibrant. In fact, often the opposite is the case. Remember Gomez? Apologies if that name has just brought back terrible flashbacks, but they were permanently two years ahead Chris Rea in the tired and jaded stakes, and they first emerged when they were about eight years old.

Evans the Death, meanwhile, are the real deal. Firmly in that long line of bands (The Smiths, Suede, Kenickie, 2Unlimited) who seem to have ideas dripping from their ears as soon as they get up in the morning. To me, they're the sound of being young at the moment. Not that I'd know much about being young any more, you understand.

That's not to say every song here is akin to something terrible like Supergrass's 'Alright' - far from it. Evans the Death sound as world-weary as the next office drone, but the way they throw themselves into this set of songs on their debut album can only be done by a band on the right side of 20. Or the wrong side if you hate teenagers.

Because I'm a hip fucker I've heard about half the songs here before, but they seem to work just as well - if not better - when listened to as part of an album. So, 'Catch Your Cold' and 'I'm So Unclean' take on even extra power when played back to back at the beginning of this album, whilst 'Threads' (the band's finest moment so far) sounds even more menacing right before the equally ace and somewhat SEXY 'Wet Blanket'.

There's nothing particularly groundbreaking about Evans the Death's sound, but then there doesn't need to be, because they write such fizzing pop songs. Katherine Whitaker's voice might be a strange mixture of Debbie Harry and Morrissey, but other than that they use this almost obsessional drive to play every song like it might be their last. In a world where slack-jawed 21 year olds in bands seem to think that growing a beard will render them instantly fascinating, then this, amongst other things, makes Evans the Death heroes of my pop world.

Evans the Death's debut album is out in April on Fortuna Pop!
Posted by A layer of chips at 14:30