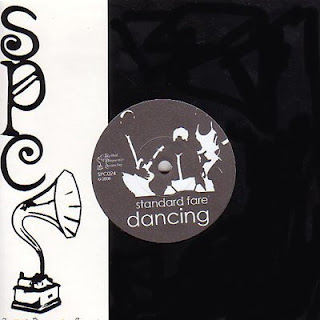 Standard Fare may be added to the bill of The Motifs gig next month. I love Standard Fare for many reasons: the crackling female vocals; the way each song seems as though it's about to fall apart before it roars off into the stratosphere again; the fact that, in the days of ridiculous band names, they have a quite self-effacing one; but most of all - because they either refuse to be part of, or seemingly have no knowledge of "the scene". And that quite appeals to me.

Darren from Thee SPC who is putting out their excellent split single with Slow Down Tallahassee said as much when he asked for a gig for Srandard Fare, and that only made me like them more.
Huge win for Town yesterday against Gillingham. Such has the been the misery of this season that I made a decision last week to try and live a normal Saturday instead of sitting in front of Sky Sports News with a bottle of wine, drowning my sorrows as another last minute goal is conceded. Yesterday I went into town, bought the second series of Early Doors on DVD for a fiver from Fopp, and watched that from half two until five before checking the results.
I wish I could afford to go to the match regularly. And the train situation is useless between Nottingham and Grimsby. It's so much less nerve-wracking being inside the ground. Watching a game via vidiprinter is CRAP.
Posted by A layer of chips at 06:55