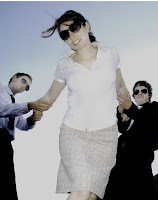 A week between updates. How have you coped?

Those of you idle, silly or plain unlucky enough to not have seen Standard Fare yet have missed out big time. I might have been 'tired and emotional' after the Mariners excaped relegation on Saturday, but they played a blinder at Sumac.

They've also been good enough to answer some questions for me.
How did you all meet?
Andy: Dan and Emma met when their previous bands played a gig together, both bands fell apart around the same time and so they started playing together, they needed a drummer and had seen Andy play before in Dan’s brothers band. They liked what he was doing and so asked him to join them and he said yes.
And where is the band based? Is it Sheffield?
Dan: Yes we're now based in Sheffield, we started out in Buxton but relocated in 2007 when Uni studies made Andy move to Sheffield & Emma move to York. Sheffield was a nice middle point with lots going on musically.
Can you tell me some of your musical and non-musical influences?
Andy: My drumming isn't influenced by my taste of music its more Dan’s and Emma’s. Graphic design and Typography, Eating and Cooking Soup, Asking Questions, Colours.
Dan: Evan Dando of The Lemonheads for the way he can lift up a whole song with a few clever words or a simple melody, Green Day for the passion and urgency they can portray through their songs.
Emma: Sam Cooke, Fleetwood Mac, Blondie, Guster, The Be Good Tanyas, Camera Obscura, and Randy Newman. Non-musical would be films by John Waters, The Graduate and Some Like it Hot and the big influence for writing songs is the stuff I want to say to people but can’t articulate at the time.
You've been picked up by Thee SPC. How did that happen? And were you aware of the label beforehand?
Andy: Emma was looking for interesting musical goings on in Sheffield and found the label, sent a demo and Darren from Thee SPC liked it and the rest is history.
Are you happy with the single?
Andy: Absolutely. Definitely. Completely.
Dan: We love playing the song and to see it put on vinyl is a really cool experience, we're also really pleased with the positive response we've had towards it. It feels like we're on the right track.
Emma: I love it, it’s fantastic hearing our band coming from spinning vinyl.
How do you decide where to play and when?
Andy: I usually just say 'yes.'
Dan: We try to play as much as possible, we’ve become friendly with a few promoters who put us on or at fundraising events such as a Sheffield Live! Event we did recently. Darren, our label man, has got us some gigs further afield in the past few months which has been great.
What makes playing music in your band so special?
Dan:We’ve been playing together for almost 4 years now pretty much every week and from that consistency we’ve got this energy when we play together. When it comes to new songs, it's the excitement of not knowing what we'll each bring to the song and how it will turn out.
Emma: I can come to a practice or a gig feeling stressed, tired, ill or depressed and as soon as we start playing it all dissolves and the music takes over and nothing else matters. I only get that from playing with Dan and Andy. I also think there’s room in our music for us all to do interesting things and (within the confines of indie/pop/rock) create something original.
When are you aiming to take over the world?
Andy: I dont want to take over the world, i'd just like to mark it with our 'wicked tunes yo'.
Emma: It starts tonight - from tomorrow you'll see our name in every train station, on every bus and in pretty much every airport on the planet. We still plan on taking things one step at a time but a global advertising stunt seems to be the next logical step!
Posted by A layer of chips at 17:44

hi sam - i loved the band! Although the main reason i bought the 7" split single was for Slow Down T but Standard Fare track killed it!