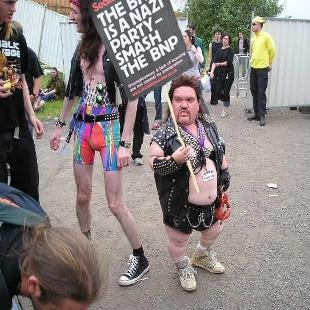 A friend of mine went on the demonstration against the BNP's Red White and Blue festival in Codnor, Derbyshire yesterday. For those that don't know, this is the BNP's annual get-together where by day they play harmless country fayre-style games, and by night they pack all the kids off to bed and get some charmless crackpot in as guest-speaker, chuck racism around like confetti, and end by Sieg Heiling Nick Griffin until midnight. Probably.

The left isn't very good at countering the BNP. It veers from tiny, anarchist kamikaze actions, to the more brain dead, and often arrogant auto anti-racism of Unite Against Facism (UAF), one of the SWP's many fronts.

UAF's main spokesperson is Weyman Bennett who routinely strolls in from London to one of these demos, dons his hi-vis jacket, consults the BNP, fights his way to the front and starts hectoring at everyone through his fucking megaphone, before starting a chant so mind-curdlingly embarassing that the boys of Cable Street must be furiously spinning in their graves.

Jamie said that exactly the same thing happened yesterday. And that he thinks "anti-facism is a waste of time." This is sympomatic of the malaise the SWP spreads over a huge number of socialists and communists it comes into contact with. Young, enthusiastic people join up with the promise of "claiming the streets" or "smashing the BNP" only to find that internal democracy in the party is non-existant, its leadership is arrogant and at times apolitical, it's sectarianism and wilful ignorance of the rest of the left arrogant in the extreme, and that they have to sell as many Socialist Workers as they can in Mansfield town cente on a Saturday morning to a disinterested public who only came into town to get some new work shoes.

The UAF/SWP is obviously claiming a huge victory against the Red, White and Blue festival. But then it claims a huge victory after every action. Bennett is quoted on the UAF site as saying:

"This was a great day for anti-fascists. We brought more protesters to Codnor this year than the numbers the BNP managed to attract to its 'festival' of race hatred. They had fewer people attending this year because the protests drove away their softer supporters.

That's maybe because at around £35 for a ticket, a lot of people couldn't afford to go along. Capitalism is going through one of its deepest crises. Not that UAF/SWP would take that into account, like.

But perhaps the biggest problem UAF/SWP has is it's complete ignorance of what its day-long demos has on the people living in surrounding areas. I'm pretty sure I wouldn't want to hear Bennett hollering through a megaphone all afternoon if I was trying to isten to the footy scores on the radio. Nor would I be too chuffed if I couldn't get to the chippy because most of the roads on there way there were blocked off.

UAF/SWP has no ties in any working class communities it parachutes into. And neither will it develop any if it continues to act in such a high-handed way. It refuses to join locally led demonstrations and even organised separate buses from Nottingham yesterday.

Until the SWP learns that shouting "Nazi!" at the BNP is never going to work; until it realises that working with working class communities in order to fight the BNP might just be a good idea; and until Weyman fucking Bennett stops rolling up to everything and relying on the police all the time, then its strategy will continue to fail. It'd be really interesting to find out how many people from Codnor were on the demo, actually, but that's for another day.

Still, Jamie got to meet Harpal Brar. That's always a bonus. The mad fucker.
Posted by A layer of chips at 14:25