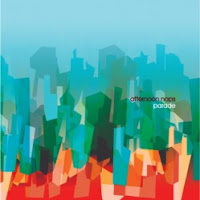 There are few albums you can put on, listen to once, and fall completely in love with. This, though, is one of them. From the Cats on Fire-y 'Plum City Fight Song' (and isn't that a great name for a song?), to the dreamy bedtime lullaby of 'Digitally Altered Sunset' every song here is so playful, inventive and begging to be loved.

'The Fall Companion', for example, builds and builds and then twists around a dozen different corners before smacking you square on the lips. Afternoon Naps are great at snogging.
'Catholic School' sounds like the Shangri-Las playing a Blondie song. It reminds me a little of The Icicles or A Smile a Ribbon, and I think it's my favourite song here.

You want lounge-pop? You've got it with tracks like 'Mitten Fingers', and it's ridiculously cute descending bassline part, and general air of summery melancholy. Although it's clearly about snow and stuff. I blame global warming.

'Parade' has even got a disco song on it. It's called 'Discoverse', and it features those 'boom-boom's you got in that Kelly Marie song years ago. It's all pretty wonderful, really.
Just when you thought this year couldn't throw up any more precious albums, Afternoon Naps have sneaked in the back door of October. 'Parade' is thrilling, joyous and pop at its very best.

Download 'Catholic School' here.
Posted by A layer of chips at 10:15

I saw you and other people talking about Afternoon Naps here and on anorak earlier, but for some reason their name stopped me from considering them. Silly me. Tonight, bored, I donwloaded Catholic School. This is a great song!