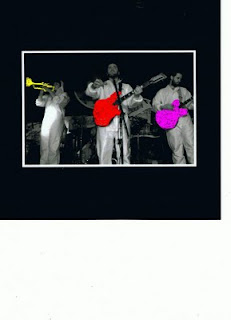 To Hull and back with The Rocky Nest on their bus of pop. I'm probably being lazy here, but when I'm listening to songs like 'Lenny and Jenny' I can' help think of those other frazzled pop gems Fonda 500, who mixed psychedelia and perfect pop a few years ago.

If I didn't know better (actually, I don't) I'd say some of the songs here are influenced by smoking some Bransholme brown - especially stuff like the Beatles-esque 'My Perfumed Garden' and the cute nursery rhyme of 'Needle and Thread', which could quite easily be sold to a CBBC production team and used as a theme tune for a kids' telly programme.

Other times, it's like The Rocky Nest are watching and playing as a spaghetti western is filmed on the streets of Hull. See 'Blomflugan' and (again) 'Lenny and Jenny' for this.

Those who were lucky enough to get along to see The Rocky Nest in the church early on the Saturdaty at Indietracks this summer will know they're pretty thrilling live. This demo has its high points, but if you want to see the band hitting full stride and being heckled by children in the audience, then you really need to see them in the flesh. You can start by doing that here...

Download 'Lenny and Jenny' here.
Posted by A layer of chips at 08:58

They were sooooooo special at Indietracks! Hi-5!!!