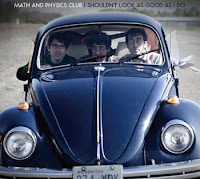 The return of Math and Physics Club fills my heart with glee, and on the cover of 'I Shouldn't Look as Good as I Do' Charles, James and Ethan look pretty pleased with themselves, too.

And why not? This album of full of swirling, shimmering songs that kicks off the summer perfectly. It kicks off with the rushing, diving 'Jimmy Had a Polaroid', before the playful, coy 'We Make a Pair' makes a gentle dash for securing the place of first dance at every indiepop couple's wedding.

These two wonderful pop songs set the tone for the rest of the album, which is a much more rounded set of songs than could be found on the eponymous debut album. 'Trying to Say I Love You' sees Charles desperately trying to save a relationship, but failing because of shyness. And that's a theme;'Love or Loneliness', sees Charles singing about sticking with a relationship out of habit, rather than love. The song ends, cheekily, rather suddenly.

'Will You Still Love Me' is a much better version 'When I'm 64' and sounds like those A Smile and Ribbon songs that wowed us three or so years ago. But the real gem is 'The Internationale', which rather than being a rallying cry for international working class solidarity, seems to be berating a braggard that Charles is tiring off. Also, when he sings "nothing in particular he does his best Morrissey impression. Add in some Marr-ish guitar shapes and you've got a beautiful homage to The Smiths.

The album ends with a pop at the indie-than-thou ghetto dwellers called 'We're So DIY', which in parts reminds me of Shrag's 'Rabbit Kids', and namechecks Tullycraft. One for the trainspotters, ironically enough. It should be a single, anyway.

An album about relationships, then. Nothing particularly new there, but it's the way Math and Physics Club do it that makes the difference. Sweet and tender in places, but with a pop bite that kills me every time. The summer starts here.
Posted by A layer of chips at 09:54