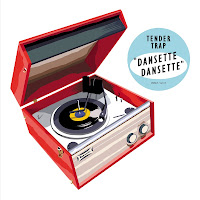 It's almost as if Amelia Fletcher is keeping Tender Trap alive and fighting to hand down the baton of First Pop Queen to Elizabeth Morris, because this latest album from the veteran of the indiepop "scene" drips with the same pop nous as we saw on the recent Allo Darlin' record.

Whereas past Tender Trap albums have had the odd track that could maybe described as loosely experimental, every track on 'Dansette Dansette' rips straight through your beating pop heart.

The three singles from the album, 'Fireworks', 'Do You Want a Boyfriend?' and 'Girls With Guns' set the bar high with fizzing guitars, 'Be My Baby' drums and swirling harmones that threaten to set you adrift.

But that trio is easily backed up by the almost rock-y '2 to the N', which sounds not unlike early Kenickie, and features the heaviest guitar part seen on an indiepop song for quite some time.

That's not to say there aren't tender (ho, ho) moments, too. Some might remember the stunning live version of 'Grand National' Tender Trap played at Indietracks last year. Well, it's pleasing to report that it loses none of its poignancy in the studio.

Similarly, 'Counting the Hours' just might be the saddest song you'll hear this year, whilst 'Suddenly' is perhaps the finest track on the album, but also the most understated. Sometimes less is more.

At a time when there's seemingly a new favourite band to love every week, there's something so precious about Tender Trap. The fact they're still releasing pop classics like 'Dansette Dansette' is enough to make this heart melt. Yours will be next.
Posted by A layer of chips at 16:41