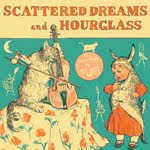 On first listen this new Twig single sounds like one of the run-of-the-mill tracks on the later (well, anything past the first one and half) Leamington Spa collections. All late-80s guitars, and oh-so-affected vocals. Y'know - those bands who were trying to be Bradford trying to be Easterhouse trying to be The Smiths.

But to label them as late-80s also-rans would be unfair, because after a while this moody little number worms its way into your everyday life just when you're least expecting it. Just last night I was changing my son's nappy, when those deep Scandinavian vocals sprang to mind. That's a compliment, by the way. I don't mean a messy nappy reminds of Twig's music.
Meanwhile, the b-side 'Scattered Dreams' features some laid back sax, but not in the style of Kenny G. More early Bobby G, if anything, what with those chiming guitars, and you can see where Cats on Fire got some of their shapes from.
That this single is somewhat over-stylised shouldn't detract from the fact that there's some dreamy pop magic at work here. You can order the new Twig single from the ever-reliable Fraction Discs website.
Posted by A layer of chips at 16:47