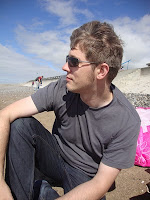 I'm not going to apologise for two Liberty Ship posts in a road, alright? I sent some questions via electronic mail across Nottingham (via outer space, or something) to Marc Elston. Fighting through his collection of guitars, here's what he said...

What have you been up to since The Liberty Ship ended?

Parenthood, mainly and loving it. Oh... and putting food on t'table and roof over us heads!

And why did the Liberty Ship end?

The band ended because of work relocations and big bad work commitments generally. Boring real life stuff that mature people in bands have to deal with. It's all so much easier in your teens and twenties... apart from the rabid egos.

What do you remember most about being in that band?

The gigs at the magnificent Junktion 7, the excitement at putting an album out on Matinee, hearing the songs become fully formed by the band, the easiness of our band relationships and enthusiasm. I was so lucky, I had the kudos of being in band as odd and unlimited as Johhny Domino and an outlet for the pop stuff I wrote in The Liberty Ship.

Does it surprise you that Bulldozer Crash are still such an influential band?

Were we? Are we? We had a great time making that music and if geography and other comintments allowed I'm sure Stephen and I would work together again. It's a shame we never managed more gigs or an expanded line-up. Bulldozer Crash was essentially a few weekends to produce those songs stretched over about 3 years.

There's been a real upsurge of interest in indiepop music over the last two or three years. Is this something you've beebn particularly aware of?

I would love to play the hipster and say yes but apart from your activities I'm way out of the loop. I WILL go to Indietracks next year, I have no excuse not to as it is just down the road. Do old people go? I must be younger than Mighty Mighty!

What are the chances of you and your brother getting together to make some music?

Well, we've just been on holiday in Normandy together but there was more time spent keeping the bambinos occupied. Graeme did teach me the chords to the Cbeebies 'Goodnight' song. Graeme has lots of music to finish off which will see the light one day. I'm going to whisper this but he is more talented than me and I don't really think I could offer anything that he can't do himself. I wish I'd given him The Liberty Ship stuff to produce as he would have done a much better job than me. You once said that one of our songs sounded like it was recorded under my bed which isn't far from the truth!

Indeed, are you still making music?

In a word no. There is no real regret in that at the moment as I don't have anything I really want to express. The Liberty Ship was a fertile period for songs and I'm really proud of some of them but you can't force it. By the end of The Liberty Ship I was not as happy with the songs for that reason. I would like to play some of those songs again with nice people. The problem with getting older is it is so hard to find people who fancy doing a bit of casual music, I can't commit to a regular weekly rehearsal and I don't want to play blues covers. Are there any forty-somethings with a working knowledge of the Go- Betweens back catalogue, an easy going temparament and guitar/bass/drumkit in the Nottingham area? Answers on a postcard.

Did you read Stephen's new issue of This Almighty Pop!?

I did and I've always admired Stephen's enthusiasm and punk rock ethic. He is still keeping the faith and he introduced me to a lot of great music.

Still listening to East Village and The La's, or have you any newer favourites?

I was never a big La's fan in spite of the band name. They were great live before the rot set in. Steve from Johnny Domino is my music pusher and I've loved the recent Field Music album, Grizzly Bear, the latest Hot Chip stuff, I like the Girls album. I'll always be a pop kid so I'll never abandon East Village, Primal Scream, The Weather Prophets - 12 string electric guitar still makes me deliriously happy.

And where will the great Liberty Ship 'Ten Years On' gig take place?

Somewhere nice and middle class like a big Gite in the Loire. Or Indietracks... hey, that's an idea!
Posted by A layer of chips at 11:34