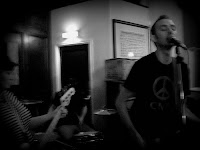 I've not been posting as much lately, partly because I've not had much to say, but mainly because I was ABSOLUTELY SHITTING TERRIFIED about the Nottingham indiepop weekender this last Saturday and Sunday.

Would enough people come? Would the PA turn up okay? Would Pete from Horowitz be able to bring a bass amp with him? How were we going to cope with lugging the PA and all the gear downstairs with us half way through the day because the venue had double booked us?
The answers: Yes, plenty. After a minor terrifying delay, yes. Of course he did - he's a walking miracle. With ease - Harvest Pale has strength-giving properties.
Everyone and everything came together this weekend. The atmosphere in Bunkers Hill during Milky Wimpshake and Allo Darlin' has been described by some as "euphoric". Hyperbole? Maybe, but only just.
Y'see Milky Wimpshake unleashed the sort of pop energy that only they can. Christine started crying when she was playing the still awesome 'Don't Let Our Love Go to Waste/True Love Will Find You in the End' medley. Most of the rest of us just stood there and gawped.
But there were many, many more moments.
The Peterboroughs started off the day with their last ever gig and were self-effacing enough to make the whole thing charming.
Stefan from Northern Portrait might have been playing alone, but he filled the room. The songs remain the same even without the band. It helps that he's a cute as a button, of course.
The Sweet Nothings were playing their first gig with a new drummer, and you really couldn't tell. They played with a new found confidence - wallflowers no more.
Horowitz, followed by Betty and the Werewolves, followed by Milky Wimpshake, followed by Allo Darlin' - that's about as near perfection as it's going to get, and so it proved.
I don't remember getting home on Saturday night.
Sunday passed in a blur, and I was flagging until Evans the Death popped up and made me feel better just by playing a few pop songs. Crushingly young, they made me feel like a dinosaur with a Zimmer frame, and they for sure won't be playing in such small places as The Chameleon in Nottingham for much longer, but it was nice while it lasted.
I left The Chameleon on my own halfway through The Middle Ones' set. I didn't want to be there when it ended. I wanted to go home and pretend that people will still listening to pop music and having fun, even if I was too tired to be there with them. So I left my co-promoters sorting the money out, and, umm, pulling pints, whilst I jumped in a taxi and ordered a curry.
The euphoria's been replaced, inevitably, by wearisome reality. Still, at least we can start planning for next year...
Posted by A layer of chips at 11:31