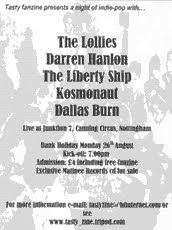 It’s hard to comprehend these days when every Matinee release seems to be lauded to the heavens, that, once upon a time, releases on the label seemed to slip through the net, ignored, yet still meekly boasting a shining pop beauty that meant so much to the few who did realise their worth.

One such album is ‘Tide’ by The Liberty Ship. No doubt named after The La’s song of the same name, The Liberty Ship were local heroes of mine in the early 2000s. Their singer Marc Elston - a local teacher - had been in indiepop dynamoes Bulldozer Crash and was/is devilishly handsome. Backed up by Steve, Tim and Rachel (who I had a enormous crush on for a while, I seem to remember), The Liberty Ship made clever pop songs sound easy. The band’s debut single, 'I Guess You Didn’t See Her’ sounded like The Beatles playing an Orange Juice song. The follow-up, 'Northern Angel' was brassier, more confident and emerged around the same time as a treasured mini-album called 'Small Lives' on Sunday Records.
Press pause.
Nearly a year went by until “Tide” was released on Matinee. "Written and recorded in Nottingham" it shyly boasted on the sleevenotes, the album was mastered by Stephem Maughan. And yet, hampered by having to record the album at home, The Liberty Ship lost some of their momentum. But 'Tide' is a tiny masterpiece of a record. It soars and swoops and chimes and remembers to be subtle and sly and clever at all the right times. It’s also a straight-down-the-line pop record too, of course. It couldn’t really be anything else.

It all stopped after that. Rachel moved down to London (I think), and the band fell apart. I managed to arrange a few gigs in Nottingham for The Liberty Ship during their short-lived prime and they were mighty live. More powerful than on record, they flew above the rest of the bands on the bill. Like I said - they soared.
My favourite Liberty Ship song is 'Shine On'. You can download it here.
Posted by A layer of chips at 15:40