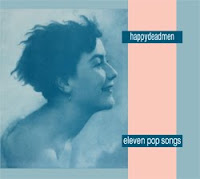 Happydeadmen were around in that Sweden at the beginning of the 1990s, and 20 years later, Fraction Discs have decided to release their debut album 'Eleven Pop Songs'.

At first listen, 'Eleven Pop Songs' sounds very much of its time. Remember that slew of late '80s/early '90s indiepop bands who clogged up most of the latter stages of the 'Sound of Leamington Spa' compilations? You know those lot; the ones who'd listened to way many Lloyd Cole records than is good for anyone. The sort of bands that would make Deacon Blue sound like Huggy Bear. Well, Happydeadmen could easily be put in a box with that lumpen lot, if you wanted to do that.

But you'd be wrong to, sonny. There's more trickery at work here than a few jangling guitars, some turn ups and a bad Morrissey impression. Happydeadmen had more craft, more guile and more pop in their pores.

You can see it in 'Emilia', which starts off sounding like The Smiths' 'Jeane' before strutting away on its own path with a drum track that makes you want to get up and start shadow boxing. But Happydeadmen had a sensitive side, too. See the soaring 'We Swim' and the gorgeous 'Silent Sigh City' for immediate evidence of this.

Best track here is 'Heaven, No!' a perky rockabilly shuffle that brings to mind The Man From Delmonte's rarely-reached best. Here, Happydeadmen kept it simple, and there's lovely middle eight of chiming guitars, before we get back to some serious crooning to the end of the song. Top stuff.

Happydeadmen's legacy is clear for all to see, and can still be heard in the likes of Acid House Kings and Danish brethren Northern Portrait. What they had at the beginning of the 90s has been replicated and tweaked by countless others. Why not go right back and get in at the start?

You can order 'Eleven Pop Songs' from the Fraction Discs website.
Posted by A layer of chips at 05:36

Earn easily 200 dollars here in the internet. Simply be an affiliated member and promote the site and its product! http://www.earn-200-dollars-online.info/