Pipas for the people 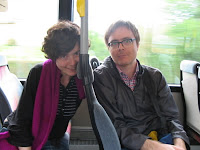 I've finally managed to get over my Felt Tips obsession, and have MOVED ON. Now I'm back to my occasional obsession with Pipas.

Pipas first entered my life when Jimmy from Matinee started sending me stuff to review for my old fanzine, tasty. The release that popped my cherry was the 'A Short Film About Sleeping' ep, an innocent mix of swaying, lush pop that sounded completely new and fresh way back then. My heart was theirs

This was quickly followed by the dreamlike album, 'A Cat Escaped', with classics such as 'The Conversation', 'Run Run Run', 'Barabapa' and 'Old Kent Road'. Every one a smash hit, and every one now a dear friend.

The 'Bitter Club' ep (with the stunning, desolate 'Jean C') and then The 'Chunnel Autumnal' album followed. Almost immediately you wanted the next release and it came with in September 2006 with the 'Sorry Love' album, which saw them move into something a little more... electronic.

It's hard to describe the feeling of warmth when you put these records in your player. The knowledge that, for the next 30 minutes ('cos Pipas songs are short - it's pop you see) you'd be whisked off to a world without stress or bills or work or illness or fucking Tories.

Rushing home from work, getting changed, running to the train station, on the train - we made it. Drinking cans of terrible lager as we hurtled through South Leicestershire to stave off the excitement. Or to make us more excited - who knows?

We meet Marianthi (or was it Sandy?) at King's Cross and walk to the Betsey. There's Sandy (or was it Marianthi?) - there's, seemingly, the whole of the London indiepop mafia. For a provincial, this makes this momentus occasion even more thrilling.

The gig goes by in a whirl of crushed shoulder and craning necks, and then Pipas are apparently gone forever. We'll not see them again. Only Sandy had got the wrong information! Pipas live! We'd inadvertently spent the best part of £120 on seeing a band at the Betsey. Can many people say that?

It was bitterly cold that night, that I remember. But we stocked up on booze after the gig, made the short walk back to St Pancras, and get in to bed at about half past two. Only four hours until we get up for work. But we can listen to Pipas to stave that off, I guess.
Posted by A layer of chips at 16:48