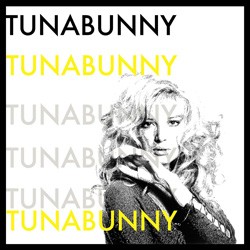 I'm a bit surprised how many folks are kinda digging it, as they are so much of a live thing. It's like the intensity of Kristin Hersh, and the frailty of Cat Power sometimes. People in Athens either love or hate them; but there is just something about them that inspires people to create. I just offered to do a poster to start, then it became a record, then I did the sleeve, then I shot a video, now I'm about to start on the new sleeve and start work on another video.They even have pulled me and some others out of their shell to start their own bands. It's weird but a lot of their thing is their live show.

Not my words, comrades, but the words of Mike Turner, general secretary of Happy Happy Birthday To Me Records, about a band called Tunabunny, who he describes as potentially being the most important band he's worked with. He's clearly smitten.

Listening to Tunabunny's debut album on HHBTM it's pretty easy to see why. Although Mike thinks it's a live thing, the band make a few MP4s sound pretty exciting too. Tunabunny are some kind art rock mess. Intense, scrappy and often all over the place (this sorten of heightens the thrill, though), but underneath that lies a beating pop heart.

Certainly the 15 tracks on Tunabunny's album constitute what the kids are calling today 'a journey'. Comparisons could range from a seriously loose Spacemen 3, to a pissed up Throwing Muses. Then there's a touch of Talking Heads tension in there, to bind it all together. It's pretty memserising stuff.

Last year I thought Crystal Stilts would become this kind of band. They sort of let me down live. I'd saw my left ear off to let Tunabunny whip my heart out and beat it around a bit.

You better buy this record, really. Else Father Christmas won't be visiting you this year.