Songs that saved your life, part one 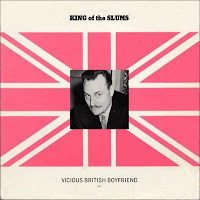 You can wend you way through life forgetting a thousand songs, but there are those that stay with you, those that tend to end up on every mix tape you used to make. Songs like Fanciable Headcase by King of the Slums.

I first heard this track on a John Peel show, I think. I'd not heard anything like it before, and I've not heard anything since.
King of the Slums emerged from a mid-90s Manchester scene very much in the shadow of The Smiths. And they didn't sound anything like The Smiths. Sarah Curtis's electric violin sounds red raw, Charley Keigher's passionate kitchen sink vocals, and some guitar work that rode roughshod over much of the delicate picking that was around at the time. They were altogether a thrilling prospect.
The Vicious British Boyfriend ep appeared in February 1989, and had the most delicious cover art; mad racist Enock Powell's face right slap bang in the middle of a pink Union Jack.
Fanciable Headcase, the ep's lead-off track, is immense. Keigher's lyrics were always vivid and vibrant, but here he surpasses himself. "I'll be your vicious British boyfriend, you can be my fanciable headcase," he growls to an unknown partner. Who could resist? Not me.
The track lasts nearly five minutes, but it feels like two and half. The violin ducks and weaves like never before, and there are enough spine-tingling moments to make you turn the heating on. It's an epic pop song. And you don't get many epic pop songs, do you?
I listened to this track over and over again this afternoon at work, in preparation for the long weekend, and all that it might bring. I used to listen to this track over and over again when I was getting ready to go out, when I was young and daft enough to "get ready" before going out. This song still has the magic, alright. It made me want to go to the pub immediately, and disappear into the night with it playing loudly in the background, like the old days.
"One swallow, doesn't make a summer. But one'll do for now - well, as if I had a choice."
As it is, I'm staying in with spaghetti bolognese and some washing to do. Times change, but this song doesn't. Thank heavens for that.

Amazing song, and great to see it enjoying the light of day again.

I could've sworn that was a violin Sarah Curtis was playing, mind.

Killer bass there. I bet live it would have rumbled one's GUTS.