Songs that saved your life, part 10 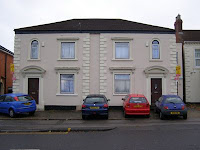 1995 was a funny year. It started with my third straight year on the dole and it ended with me seeing someone still doing the final year of her A-Levels, much to the hilarity of my friends. I was only 21, but they were all approaching 30 (or older), and to them it was one of the most hilarious things in the world.

I spent most of the year living in a grotty Nottingham flat on Forest Road East - one of city's red light districts. I'd wake up in the middle of the night, go for a glass of water, look out of the window and see a desparate young woman giving a slightly embarrassed bloke a blow job. After a while it was water off a duck's back, and at least with people around the place at all hours of the night I was never going to get burgled.

I also lived with the smelliest boy in the world. He really did pong. But that's another story. Because all-in-all it was a fun, exciting year compared with the two and half year struggle that had come before it. I met this girl and it seemed to sweep clear a little bit of the angst that'd built up through my late teens.

Around this time I was heavily into stuff like Scarce, Animals That Swim, Velo-Deluxe, Versus, Polara, Girls Against Boys - that kind of thing. And then, one day, I came across The Harvest Ministers' 'A Feeling Mission' going cheap in Selectadisc. Using some of the £3.33 an hour I was earning as an usher at the local Odeon I bought it and took it home and listened to it. About twenty times on the row.

'A Feeling Mission' isn't the greatest record ever made, but it somehow signalled some kind of tiny rebirth after being dragged down by the relationship I'd moved to Nottingham for in the first place. And there's one song on the album I used to put on after a shitty shift at the Odeon that really rung true: 'Cleaning out the Store'. It was the sort of song you could put on, dive onto the bed, and stare at the ceiling whilst singing really badly. And probably do some kind of weird, dramatic arm dancing at the same time, too. But that was optional. I was only 21.

This song is so 'of it's time' that I barely dare listen to it nowadays, but it's almost impossible not to revisit it now and again.

Ooh, that felt good to get off my chest. And I can't believe I managed to find a photo on the internet of that shitehole flat.

You can download 'Cleaning out the Store' here.
Posted by A layer of chips at 17:36

Aw, the Harvest Ministers! Nobody liked them that much, did they? The first album was lovely though.

I found my copy of A Feeling Mission in a shop in Northampton, oddly enough, so it seems to have a habit of turning up in places you didn't enjoy living.

No! Everyone hated them, didn't they? Was it because they were Christians or something? Or have I made that up?

Oooh I dunno. I thought it was just cos they had a quite middle-of-the-road sort of sound, y'know? I dunno. Or maybe everyone was being racist cos they were Irish. Did I mention that I dunno?