The Queen is dead 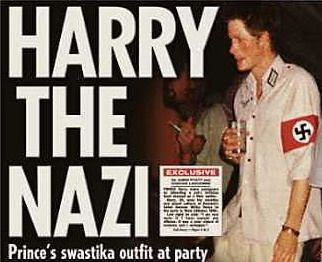 Should we really be surprised that Harry Wales is a huge racist? It's in the blood, after all. In the 1930s the British Royal family actively supported the Nazi regime in Germany. It's widely believed that Elizabeth Windsor's mother, the now deceased Queen Mother, gave a copy of Mein Kampf to a friend, saying, "Even a skip through gives you a good idea of his obvious sincerity." She called black people "nig-nogs" or "blackamoors". And she backed white minority rule in Rhodesia. And so the die was cast, you could say.

There has been some outrageously poor reporting on this story in the mainstream media. Sky News basically went with the line from Clarence House that this was "all done in jest." Yeah, fucking hilarious for the "paki" who had to sit there and take it, I imagine.

The BBC mimics this line, and lets the Clarence House statement go uncontested. In the name of''balanced reporting', I presume.

"Harry's comments are a disgrace and may seriously harm our armed forces. Racism can have serious consequences for our services personnel, for morale and for recruitment. We must expect the highest standards from someone who is not only a serving officer but who is also in line to be our Head of State."

Yes, we musn't let anything get in the way the British army's violent imperialist adventures overseas, must we?

Having Prince Phillip, the bigoted dinosaur of the current Windsors around as your Grandad can't help, of course. But those looking to excuse Wales as "misguided" need only look back three and half years when he dressed up as a Nazi SS officer for a fancy dress party. Crazy times.

The real irony about this is that the story was broken by the News of the World, the hideous Sunday newspaper owned by Ruper Murdoch. This is a paper which manages to vilify anyone who doesn't have a white face at just about every turn. Immigrants or asylum seekers are their prey. Yet a royal being racist sells papers, doesn't it? Even the most die-hard of Britain's soft-racists are fed up with reading about how much a week benefit an asylum seeker is supposed to be getting, it seems.

The Royal Family should be abolished immediately. That goes without saying. But the really sickening part of this story is that Harry Wales seemingly has plenty of apologists out there a the BBC and Sky News.

Ingrid Seward, the toadying editor of the tawdry Majesty magazine is quoted as saying:

Yes, it would be very offensive if Harry went around calling people Pakis in a racist way but this was not meant, you know, it was meant more of a nickname.

"I mean, Harry's mates call him Ginge or Ginger - that could be equally offensive to people with red hair."

This is the sort of shit we're dealing with, people. Please make it stop.
Posted by A layer of chips at 07:12