There's always something there to remind me 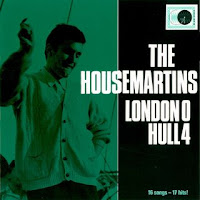 Whilst I was unpacking my records over the weekend, I took time to actually have a look at them properly. Record sleeves bring back such vivid memories, don’t they? Twelve inch snapshots of a moment in your life.

Anyway, perched at the front of the pile was The Housemartins’ ‘London 0 Hull 4’, a raw, exciting, twitching masterpiece, and (although I’m sure some of the more dull purists out there will argue that The Housemartins weren’t an indiepop band) the first indiepop record I owned.
My first meeting with The Housemartins came through my friend Jonny Dennis. I was 12, and he had an older brother who was into all the cool music that, during my years of listening to Elton John, I thought was complete gash. Jonny used to play me his brothers Smiths records when we were at primary school, and I used to think they were terrible. What an idiot I was when I was at ten.
I’d made the somewhat obtuse shift from Elton John to The Cure by the time Jonny started trying to brainwash me with The Housemartins. I’d seen adverts in Smash Hits for ‘Flag Day’ and ‘Sheep’ but I didn’t really pay much attention to them – like most of the population - until ‘Happy Hour’ came out. I remember this vividly: I was sat, as shy as anything, at a disco that our secondary school had put on to celebrate the fact we’d survived the first year. The DJ (who was an actual real-life vicar, and whose DJ sideline was called The Church Mice – twee or what?) put ‘Happy Hour’ on, and Jonny came hurtling up to me, dragging me up to do that weird dance the band do in the video. Of course, I didn’t, because that was way too gauche for me to do back then, but I secretly loved that song to bits.
Christmas 1986 saw me receive ‘London 0 Hull 4’ as a present. I’d asked my step dad if he’d by it for me for weeks, but he refused saying that they were gay and communists. True story. As if that made them sound any less exotic. I think my step dad worried quite a lot back then, because I was heavily into the Pet Shop Boys, Bronksi Beat and later Communards. Poor bloke must have been pulling his Daily Mail hair out.
I digress…
I can still remember the feeling of ripping off the wrapping paper that Christmas, and just gazing at that sepia and green cover. With Paul Heaton doing that dance. And ‘Take Marx, Take Jesus, Take Hope’ emblazoned on the inner sleeve. I’d never been so fucking thrilled.
Twenty-five years on (gulp!), and that album has lost none of its lustre. It remains a record you can go back to again and again to – as it says – take hope from. And although I think that ‘The People Who Grinned Themselves to Death’ is a better album, buying it didn’t fill me as much with joy as receiving ‘London 0 Hull 4’ did.
The mid-'80s were a weird time to be living where I did. Each night we’d see images of the heroic striking miners on the local news. Thatcherism was at its height, the Labour Party and the TUC limp and lifeless, and then along came The Housemartins. Now, I’m not pretending to have been a member of the Young Communist League in 1986, but that band taught me pretty much everything I needed to know about what was wrong with capitalism, and led me down the righteous path to socialism. Looking at the lyrics printed on the inner sleeve now, and they seem so resoundingly right in 2010, too.
I’m pretty sure there isn’t another record in my collection that has had such an effect of the rest of my life as ‘London 0 Hull 4’, anyway. That’s what I’m blethering on about. I wouldn’t feel like this at all these days (perhaps…) but I remember being slightly, properly traumatised when The Smiths and The Housemartins decided to call it a day within six months of each other. I dedicated the wall above my bed to Housemartins cuttings the day I read that in NME. Some honour, I can tell you.
The Beautiful South were shite, mind.
Posted by A layer of chips at 17:56

I hadn't heard this album, but after reading this post I'm not sure how I could not check it out.

I was never really a fan- I appreciated them, I knew people who loved them, I liked it when they turned into plasticine in that video- but now I want to go and listen to the Housemartins and read this post again and wish I hadn't been- back then (still?)- so tied up in received attitudes/opinions and, I guess, fashion

Unlike yourself there's some bits of the Beautiful South songbook I'm rather fond of... 'Let love speak up itself', for one, I find rather moving, I think Heaton's vocals on that are damn fine

Just don't let the cool kids know I said that

And right now we need more bands to pick up that baton and write lyrics from a more explicitly radical point of view. Don't you think?

I absolutely do think, yeah. I mean, I don't have a problem with bands not being political at all, but it'd be good if some of those no-brained bands who turn up in the NME each week had something to say about what's happening at the moment.

I'm not holding my breath on that one, like...

great post. i love that tingly feeling that comes from a mixture of vinyl and nostalgia. must be something in the dust in the grooves.

oh, and i think 'old red eyes is back' is pretty good. but thats our secret.

I absolutely love this post. I love your entwined musical, social and personal memories!