The Whatevers for free 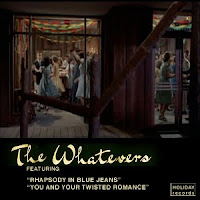 There's a sort of ragtag innocence about The Whatevers that makes me want to play their songs over and over again. The kind of unknowing pop genius that we saw with The Deirdres, and we see now with the likes of Standard Fare. The special mix of boy/girl vocals, that, if put together as perfectly as they are here, make a song completely irresistable.

All those things are here in two amazing songs that are available free on the Drums-related Holiday Records. 'Rhapsody in Blue Jeans' might sound harmless enough, but has the pure bite of all the best songs, as well as a pretty hilarious guitar solo half way through. It's the tale of youth, of falling in love, of naming names and that whole rites of passage thing that you think you aren're going through at the time, but, actually, y'know, you PROBABLY DID. Mix tapes, forming a band, boys trying make-up on, boyfriends wanting to duff you up. It was all there back then, and it's all here in one song.
There's a sort of line with the second song on the single, 'You and Your Twisted Romance', which seems to be about having to deal with a friend who has a (probably over-dramatic) problem relationship. It sort of rams advice down your throat, so listen carefully, desperados.
Download 'Rhapsody in Blue Jeans' here.
Posted by A layer of chips at 13:45