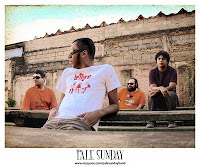 I've long admired Brazilian indiepop band Pale Sunday, who, you might remember, released their last single on Matinee just after Christmas after a hiatus that was seriously worrying for fans of the band.

Well, this afternoon, they were announced as playing Indietracks, along with Burning Hearts, The Hillfields (yes!), La La Love You, Internet Forever, Stars In Coma, Springfactory and Urbantramper.

I couldn't be more excited about seeing Pale Sunday - a band I thought, because of geography, I'd never ever get to see.

Back in the mists of time, just after they contributed a track to Matinee's Smiths tribute album, 'Romantic and Square is Hip and Aware', I interviewed the band. They said it was their dream to play in Europe. Mine too. Both will be realised come July.

Here's that interview in full.

Of all the newer bands on Matinee, Pale Sunday are probably the greatest. Their debut ep on the label, ‘A Weekend With Jane’, was rightly hailed as one of last year’s best releases. Here tasty has a quick chat with Sineval about how it is to sing in Portuguese and not be gay…

Do you think that you're completely different to other Brazilian bands, or is there a large indie pop movement over there?

I don’t believe that we are so different to the other Brazilian bands, there’s a lot of wonderful bands here in Brazil (not a specific scene) recording their songs, releasing their own cds. and making people like me very happy! Bands like Hey miss!; Luisa Mandou um Beijo; The Tamborines; Postal Blue, Wonkavision, Multisofa; Spengler tenglers; Magic Crayon; Superphones; etc. I believe, can put a smile in your face.

How did you come across Matinee Records?

In 2002, with a self release 'Everything starts when you smile' ep. We sent this record to Brazilian zines, e-zines, etc. They liked a lot, so I thought that could be a good idea to try some international label; we sent the cd to jimmy and to our great surprise he said he liked Pale Sunday and invited the band to belong to the Matinée Records cast!

How did you feel when 'A Weekend With Jane' was instantly hailed as a classic? Do you feel under any pressure with your next releases?

’A Weekend With Jane’ is very important to us. A "classic"? I don´t think so, but you can be sure, it´s a honest ep and we loved to do it! To all the positive reviews and all lovely e-mails sent to us, we need to say thank you!

You sing in English - on the songs I've heard anyway. Why is this?

Here in Brazil if you sing these kind of songs in Portuguese the majority will ask you: "Are you gay?" …hehehe. It’s true. People say this kind of words and song are too sensitive! We are not a rock and roll band.

Who are your big musical heroes?

I don’t have musical heroes but a lot of bands that make me feel proud to be alive. Some of them? The Smiths, my favourite band. The Field Mice, Nixon (from Sweden), Brighter, Camera Obscura, Hey Miss, Postal Blue, Les Ondes Martenot, The Diskettes.

How difficult is it to get noticed as a band in Brazil?

There’s no specific indie press here, just some zines. This is a problem, you could fill pages and pages with a lot of cool bands.

In my zine, pop friends and I write some articles about these bands. I´d love to run my own label.

How do you feel about the current turbulent political situation in Brazil? Did you vote for 'Lula' and what do you make of his reforms?

Brazil is a nice country to live, I don’t know what image people have of us in Europe. We have a lot of problems (political, social), but we have a lot of good stuff to show too. Our culture, our medical and scientific research, the beauty of a lot of wonderful places.

Unfortunately a lot of politicians derive great benefit from their own position. There’s a global interest in Amazon (this is our big problem). Not to protect the jungle, but to explore it. All the water, all the uranium, all the medical plant, all the gold, everything the world will need in the future . You can find there.
About Lula, the population believe him. I’m still waiting for the results. I’m tired of promises.

Have you any plans to come and play in Europe?

We’d love to play in Europe. In due course. Europe is a dream.

How difficult or easy was it recording your version of 'I Know It's Over'? (for the Matinee Smiths tribute album, 'Romantic and Square is Hip and Aware')

The difficult is the responsibility to work with a Smiths song. In a tribute album, you need to put something new in the song you’ve choose. Something like to say "Thank you!" We did the best we can. We love our indie-bossa nova version of I Know It’s Over’.

And finally, do you agree that you have the cutest website in the world?

Hahaha. We need to say thank you to a Brazilian fan, Rodrigo Maceira.He asked us "hey, you don´t have a site. Can I do it?" we said "yes" He did! We love it!

Oh, I didn't know they were from Brazil. Well now I'm praying to see Postal Blue added on this great list.

Potal Blue would be amazing, yeah!

Yay ! I'm still looking for their 1st EP cos I'm in deep love with "I know where your dreams go". But it's impossible to find it :(

So this is from 2004, huh. Wow! You know I adore most everything on Matinee. It's the classiest pop label around. But I've never really listened to Pale Sunday. You have piqued my interest previously by mentioning them and I think it's a real treat that they're coming all the way over here to play Indietracks. Wonderful!