Tiger Tape are not Tiger Trap 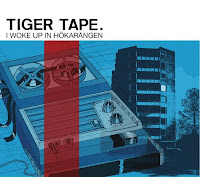 Tiger Tape used to be Moofish Catfish - a band whose name was so awful that it stopped me putting them on early last year, even though I really quite like their music.

Thanks heavens, then, that they've changed their name to Tiger Tape. Now, that might be utterly confusing and you might spend the entire day thinking you're listening to Tiger Trap (like I've done today), but even the daftest apron and bunting fanatic would agree that's it's a vast improvement.

This last autumn the Cosy Recordings crew received an email from Agnes Brynge, a quarter of its - at present - most successful act. Cosy had released a six track EP and a nine track CD-R with Moofish Catfish and the band had played festivals in Hultsfred and Emmaboda, Stockholm Pride, Pop Dakar… and a successful British ten date tour.

Mattias from Cosy Den says: "In September a 'real' album was beginning to take shape, and we would, of course, still be somehow involved - even now when it was no longer about CD-r. That’s when we received this:

Hello,
Well. We have been thinking and after a lot of discussions back and forth come to the conclusion that Moofish Catfish is (probably) changing names. It may sound as a crazy project. But I’m feeling fed up with the MC concept – it’ll take a slightly new direction now, although you obviously see clear connections to what has been. Like suicide and starting from scratch again really. But perhaps even necessary if I’m not going to end up alienated from the whole thing. We’re taking a break from gigs and will work strenuously to get the new (fantastic) songs ready and release a record in the Spring as planned. It’ll be a bit as if we’d quit, but still not. The same line up, and the music really isn’t radically different. Would you still be interested in the co-release?
Agnes xx

Mattias wasn't happy. But he should be, because the result is an album that hints at the energy and youthful fizz of the Standard Fare album, whilst retaining a slight off-kilter pop charm that makes you think: "Ooh, I wasn't expecting that." And I dn't really get more animated than that these days.

The Tiger Tape album is called 'I Woke up in Hökarängen' and it's a joint release from Cosy and Lo and Behold Recordings. It's really pretty wonderful in that it can tear you up and then take you soaring off onto a different planet, before dropping you back down again like a sack of spuds. All this happened today whilst I was trying to write a feature at work about the forthcoming Budget. It made it a bit tricky.

Download 'Is it Me or is it Everyone Else' here.

And remember: TIGER TAPE ARE NOT TIGER TRAP.
Posted by A layer of chips at 20:05

Dude, seriously. Tiger Tape is like WAAAY worse than Moofish Catfish. Mostly because MC is original, while both Tiger and Tape is words used by every band that want their name to sound "indie".
/Matey

The name of the band is very important because you can know what kind of music they play or if the band is good or bad. Also the name is misleading because good band can be taken for really bad ones only for the name.